UnNews:Creator of "Hugs Not Drugs" slogan dies from hug overdose

“The hug, I've always felt, is a clever and sneaky way to enjoy that most finest of pleasures: feeling a hott chick's boobs under the guise of civility. ”

“Oscar Wilde was a gay fag. His little cock didn't even compare to my smallest of cigars. ”

“Tyrone? One time he hugged me and he was all like "Uhhhhhh." ” 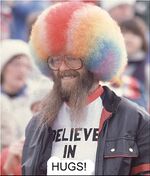 Tabernacle in his early days.

GARY, Indiana-- Tyrone Bartholdy Tabernacle III was pronounced dead today at 9:45 AM ET at Saint Demetrius Hospital in Gary, IN. An autopsy ordered by Indiana Governer Giles Niggman revealed the cause of death to be complications stemming from “acute hug overdose.”

Mr. Tabernacle was a vital yet enigmatic figure in the United States war on drugs. His slogan, “Hugs Not Drugs” resounds into history. It is a slogan that did for American hug use what the Post-It Note did for American aviation, what carrots did for rabbits and what mud-flaps with naked lady silhouettes did for truckers.

“He was a good man. He could hug a Moose’s balls straight into next Thursday. I ain’t NEVER seen a man alive with that type of moxie,” remarked Bill Chambers, head of the United American Council for The Advancement of Hugs (UACFTAH). At the time of his passing, the UACFTAH witnessed unprecedented gains in membership, from only a few members in 1975 to nearly 35 in 2009.

There was also a dark side to Mr. Tabernacle—a dependency for affection and an addictive personality only witnessed by a few of his closest acquaintances. Perhaps only Tequila Menendez, Mr. Tabernacle’s chief housemaid, knew this side intimately.

“[The hugging] started off just like every other day” said Ms. Menendez. “It was like that for years. But after while it got to be like he was hugging me like nine or ten times as day. Like all the time and whatever. And T-bone hugged really tight, you know, and was always like, hurting my boobs and stuff. Yeah, like they were always hurting and junk.”

President Obama addressed the death of Mr. Tabernacle in an emotional late afternoon press conference on Capital Hill: “Look... now...I...hug. I hug all the time. They say it’s good for ya. Matter of fact, I love it. But now...here’s a guy that tried to create a sayin’ to help people. Here's what we're gonna do. A statue is goin' up. Maybe two. [tearing up] Maybe they're... mmm... ma... maybe they're hugging each other. [regains stoic presidential composure] And I'm thinkin' about starting a clothing line! Maybe calling it like, "Tab-Tab" or... "Hug Hug's" or somethin'. I don't know. Look.”

Tabernacle is survived by his grandmother and his favorite stuffed animal, a green lizard named Buddy.