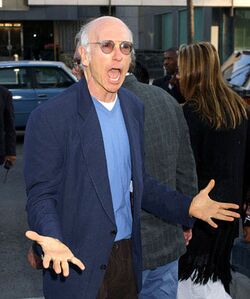 “I was taken hostage—what's the deal with that?” said hero Larry David to reporters on Thursday.

NEW YORK, New York — A man who railed against Home Box Office’s decision to cancel popular television series The Sopranos burst into the network’s New York headquarters Thursday with a bomb strapped to his chest and took four hostages at gunpoint before being shot to death, police said.

The hostages—two network employs, a security guard, and Curb Your Enthusiasm star and neurotic rich Jew Larry David—managed to escape the four-hour standoff unharmed. Police credited Larry David with being instrumental in helping resolve the situation, as the Seinfeld creator had commenced arguing with the gunman over whether or not the gunman’s actions constituted some form of awkward, unlikely and hilarious social faux pas—a heroic action that distracted the gunman, one Leigh James, long enough for an NYPD officer to empty a clip into the back of the his head.

“I haven’t been in that much physical danger since the Seinfeld finale,” David later commented to reporters.

Though James’s exact motives remain unclear, it is known that the man was an avid fan of The Sopranos. James was heard to shout, “I’m doing this for Tony, Dr. Melfi, Carmella, Silvio, Anthony, Paulie, Richie, Livia, and, of course, Sal ‘Big Pussy’ Bonpensiero!” by various witnesses during the standoff, in addition to proclamations of “Six Feet Under was pretty good too!” and “Entourage sucks!”

This incident comes just days after a similar one in Silver Spring, Maryland, where another unstable gunman attempted to get a major cable network to alter its programming block by taking hostages at gunpoint. Police are still investigating whether or not the two incidents are related.