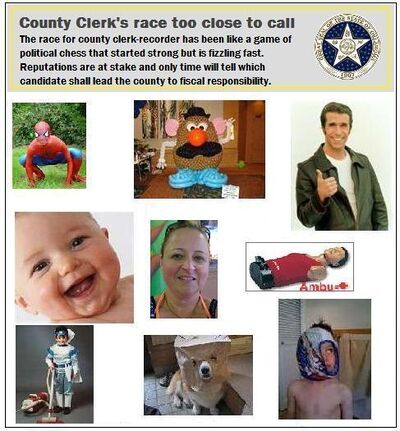 TORRANCE, California -- The competition for County Clerk's office is heated with the nine contestants running neck-to-neck one week away. Incumbent and former mayor of Hermosa Beach Arthur 'The Fonz' Fonzarelli will face longtime county employee Mr. Potatohead from the Department of Water, Salt, and Ketchup, and Underwear Man, a 5th grader from Torrance Elementary School.

Cute Baby however, adds to the dynamics by quote "Royally screwing things up.", said Lisa Razzledazzle, of Redondo Beach. "Who's gonna vote for ME when there's an adorable little baby on the list? It was hard enough running against the Fonz and Underwear Man, and now this?! Sheesh!".

The count's clerk-recorder manages pencils, paperclips, and small wind instruments, as well as dealing with real estate transactions, paycheck shortages, human resource surprises, death certificates, marriage licenses, and fishing licenses. "See, I'm qualified there! I use to always have a fishing license! I had to, it was my job!" stated Ms. Razzledazzle. "I have a fishing license too!" squeaked Vaccuum Cleaner kid. "Vrrrooom!!", and away he went.

Cedric, the Unknown Dog was elected in 2002 and re-elected in 2006, but despite reopening the county archives and dog park, was chased out of office by an elderly man with a newspaper. Replaced by Spiderman, city residents complained that calls were not getting returned. Instead, Spiderman would appear hanging upside-down in people's dining rooms during supper, shocking & surprising citizens. "Well, it was neat at first, but then he'd always come over for dinner & he'd stay afterwards and then it'd be hard to get rid of him. Doesn't he catch on? I thought he was supposed to have 'Spidey Sense' or something, right?".