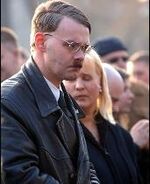 Dr. Paul Rauwe-Bipsgaten plays dress-up for the benefit of his Nazi patients. "It makes them feel loved", he mutters.

Zaanstad, The Netherlands - Some 2,000 neo-Nazis turned out in support of “Mental Health Week” in the Netherlands. Often stigmatized as violent ignoramuses, a demure and sensitive side of these notorious racists came out of the closet in support of this worthy cause. “Mental Health Week” has become a magnet for the likes of Dr. Paul Rauwe-Bipsgaten, renowned psychiatrist and fortune teller to such notables as Wilhelm Reich, Wilhelm “Sparky” Reich Jr. and Heinrich Himmler. “It’s like a banquet of fruit loops, a buffet of nuts and kooks!” , Dr. Rauwe-Bipsgaten was overheard saying to Honorary Reichs Chancellor George W. Bush, “I’m gonna clean up in Guilders!” Apparently he hadn’t heard of the Euro yet.

Until last week, no one outside the Nazi party knew that almost all Nazis suffer from a neurotic condition Dr. Rauwe-Bipsgaten termed as Cyclothyme stoornis or bat fuck crazy syndrome during his decades of research. This form of mental illness manifests itself in a patient’s rapid cycling between moods of elation and depression, with a conflicted ideation about Nazi ideology. In 1940’s Germany, the true national anthems’ words were “Deutschland, Deutschland über, unter, über, unter, Ich weiss nicht...“ (Germany, Germany over, under, over, under I can’t decide), and were systematically rerecorded for play outside Germany as “Deutschland, Deutschland über alles, über alles...“ (Germany, Germany over all [other nations], over all).

Fascists of all stripes showed up in support of their afflicted bretheren. Thousands of police were deployed to keep the peace between the roughly 2,000 skinheads who had gathered in the city, 38 miles north of Amsterdam, and the estimated 1,200 counter-demonstrators. The two sides nearly came to blows when the neo-Nazis surged the police cordon in an attempt to enter the Retegoed Medical Center for Broken Brains, which was blocked by the counter-demonstrators.

Several thousand more police were on hand from Friesland and Drenthe provinces to keep the peace between the roughly 2,000 skinheads who had gathered in the city, 30 miles south of Leeuwarden, and the estimated 1,600 counter-demonstrators. The two sides nearly came to blows when the neo-Nazis surged the police cordon in an attempt to enter the medical center, which was blocked by the counter-demonstrators.

Several officers were injured in skirmishes with the extremists, who were driven back and prevented from entering Retegoed Medical Center. Earlier in the day, the counter-demonstrators held a rally in honor of victims of Nazi crimes, in protest against the neo-Nazi march. Enraged leftists chanted, "Back in your closets, Hitlers fairies" and marched arm in arm with Jews, Muslims, and members of 70's band Focus.

"They [Nazis] took our homes, they made us slaves, they killed us by the millions! Frigging Nazis want us to feel bad for them and blame it on emotional problems? Fah!", said Benjamin Netanyahu, leader of Israel's conservative Likud party. "We must not allow Zaanstad to become a center of pilgrimage for neo-Nazis," Serge Jolly Old St. Nickolas, interior minister of the North Holland region where Zaanstad is located, told the gathering.

In an official reaction by the Dutch Government, Prime minister Peter-Jan Balkenende made an appeal to all to remain calm and let the Cabinet solve all problems through swift and justful legislation. He furthermore pointed out that the Nazis weren't all bad for the Netherlands: "After all, during the five-year occupation our economy sored and everyone was better off after the war than they were before. And those that weren't, were properly compensated by swift and justful legislation".

He then went on to draw a parallel between WW II and modern times: "Just as our nation was saved by the forces of Good in 1945, and by swift and justful legislation afterwards, we Netherlanders now have a responsebility towards those poor Muslim people that live in oppression".

His speech moved all present to tears, and many skinheads and left-wing counter demonstrators were seen making peace, shaking hands and even embracing.

The hastily-erected dependence of the Draft Office Special Forces of the Dutch Army did a remarkably good business today, although it is reported that the percentage of skinhead draftees largely surpasses that of the other faction. As a spokesman put it: "We haven't had this many recruits for the Army since the day we decided to legalize cannabis in the Military. And most of them already shave their head habitually, so it saves us expenses".