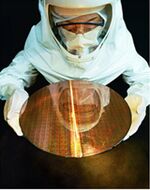 A spokesperson commented while holding a handful of the 45 nanometer electrical components in his hand, "The difficulty is not physically getting the transistors inside of the chips, but figuring out how to use the chips once we've done that. We are facing more challenges than ever trying to get all that silicon to do something, even if it's nothing at all." He later added, "Microsoft has been a major partner in our endeavors."

Intel engineers then held up a wafer the size of a dessert plate and demonstrated it solving differential equations within a matter of seconds, something most college students couldn't even do in half an hour.

"It's not about obsoleting our youth with toxic dust painstakenly etched between layers of metal, it's about increasing productivity," said Intel chairman Craig Barrett. He pointed out how the computer in general as well as hardware advances have given students, as well as all technologically privileged people, a competitive edge in all spheres of labor, education, and gaming. "Kids are actually getting their work done."