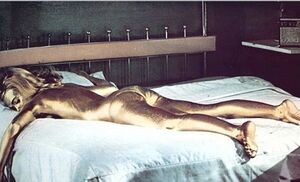 KENTUCKISTAN -- Newly declassified military documents now confirm that the take-down of a recent terror scheme can all be traced to the efforts of one brave man. That man, is local Circuit City employee Robert Scails. Say Col. Arnold Polk, Commander of Civilian Relations for Fort Knox: "That boy just saved us a whole mess'a gold."

The foiled plot, masterminded by international terror-superstar Goldfinger, was originally believed to be a mere large-scale robbery (and as such, hadn't attracted major interest from the Department of Homeland Security). It wasn't until Scails' discovery that the true aim of the crime came into focus. The plan: total eradication of the United States gold reserve, via a weapon described by Goldfinger as a "particularly dirty little bomb." 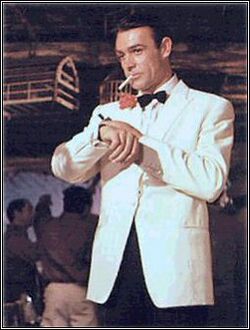 Arresting agent Bond, lighting a cigarette with his wristwatch.

The plan was realized when Goldfinger brought a VHS tape to his local Circuit City for DVD conversion. This tape featured the Mr. finger reading a fiercely-worded statement on the abolition of the Gold Standard, followed by the drowning of a scantily clad woman in metallic-gold house paint. It is unknown why the woman was chosen, as she was an Austrian barmaid with no known connections to Fort Knox. But "[i]t wasn't the girl thing as much as it was the stuff he was readin' off the paper," claims Scails. "He got a little crazy when he started talkin' about how much he hates Aston Martins and shaken martinis..."

The arresting agent in the case -- one James Bond, a member of the elite counter-terrorism battalion known as the Double-Os -- has been widely credited as the sole architect of Goldfinger's demise, due to his numerous one-on-one encounters with the reigning king of precious metal-related terror. When asked about Mr. Scails involvement in the plot's overthrowing, Bond stated that "yeah, he did help... but I didn't see any huge-ass laser pointing at his balls while he converted the bloody videotape..."

Scails is content with taking the backseat to Mr. Bond. According to sources in Kentuckistan, Robert has been enjoying a considerable reward from the U.S. Treasury in thanks for his service to the nation.