UnNews:Chuck Norris makes deal with AT&T to 'Crush the Competition' 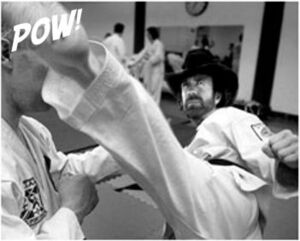 Chuck Norris has agreed to include his patented comic-book noises in the deal.

NEW YORK CITY, New York - AT&T finished dealings with internet pop icon, Chuck Norris this morning, striking a deal that will pay Chuck Norris 700 human babies' souls a month for the next ten years. The deal entitles Norris to quite literally "Crush the Competition," allowing him to beat, maim, mangle, destroy, roundhouse kick, and any other form of destruction that he can think of, any of the other leading phone services.

At a press conference held this morning, the chairman of the AT&T business announced that they would be leaving the league of 'The Wizard' and the three other companies it contains, Verizon, T-Mobile, and Sprint. He also stated to the other phone companies that may have been watching, " Because of this deal, not even your wizard can beat us!" Chuck Norris stood at the chairman's side, glaring the crowd into applause, but saying nothing.

Chuck Norris is expected to begin work in the beginning of August, where he will move to New York, and have his own office building which he may use "as he pleases". AT&T could not be happier about this deal, the customer service building has been reopened and people are being hired to work in the once desolate and lifeless building, and artists have begun remaking the AT&T logo to better fit the new, "In your face" outlook that AT&T has adopted since bringing Chuck Norris under their wing.

Chuck has yet to release his feelings on the contract, and has instead returned to his home to begin packing up his countless collections of various human body parts that he has acquired in his travels around the world. AT&T However has told sources that he is ecstatic to be working in the extortion business again. "He cannot wait to begin doing what he loves doing best, roundhouse kicking cell phone companies into submission," said the chairman at the meeting this morning.

The conditions set down in the contract have not yet been fully released, nor will they ever, according to AT&T. "What is in the contract is confidential, the only people who need to know are the AT&T high ranking officials, and Chuck Norris himself."