The top search engine in China, "Baindu," has also said that they want to increase pornography traffic on their site. 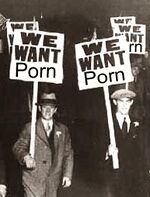 These Guys are just begging for it!