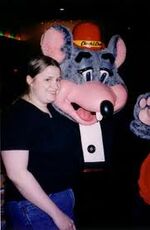 Dana and her so-called "adoptive" father

Charlotte, NC, USA -- Dana Miller turns 18 today, and for many, this is a rite of a passage. It means she's an adult. For some, this means a greater sense of responsibility, or freedom, or the term jailbait no longer applying. For Dana, it means she's finally allowed to leave Chuck E. Cheese.

It was March 12th 1998, and Dana was celebrating her 4th birthday. It seemed like a normal party at the family fun center, frustrating games that ate your tokens, scalding hot pizza that burned the roof of your mouth, and the creepiest fucking singing animals you've ever seen in your god damn life. Dana was the happiest 4 year old in the world. That is, till everyone left, and she was still there. The employees weren't sure what to do, so they let her sleep in the ball pit. They figured, cleaning her corpse out of there wouldn't be as gross as some of the diapers they've found in it.

Time kept going by, Dana was allowed to stay at Chuck E Cheese in the lost-and-found bin. She eventually acquired a wide variety of baseball caps and jackets. This is what she used to barter with others to get food. Dana became one of the worlds most successful party crashers, as she attended thousands of birthday parties she was never wanted at.

After the initial 90 days, and no one claimed her, she belonged to Chuck E Cheese. She was their property. They treated her like any other of the cast members there. Making her perform in shows, giving her breaks and giving her routine maintenance. Now that she's 18, she's finally allowed to leave.

When asked what she'll do now, Dana replied "get the hell out of my way! You're blocking the fucking door!"