UnNews:Child baffled by theft of own nose

CARBONDALE, IL Carbondale 8 year-old Jeffrey Figowitz was perplexed and confused by the theft of his own nose, which Figowitz claims happened on Sunday. 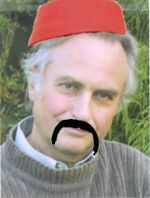 The uncle, seen here in a composite sketch done via computer.

"It was there one second, and then it wasn't," said Figowitz. "My uncle reached over without any provocation and took my nose."

Figowitz says that at about 9:00 AM, he was sitting at the table and eating breakfast when his uncle walked over and took the body part. The uncle, 47 year-old Mark Figowitz, then said something to the effect of, "I have taken your nose." Figowitz was visibly distressed upon his nose being stolen, but finished breakfast before confronting his uncle. Figowitz shrugs off the suspicion that his the stolen nose was actually his uncle's thumb between two fingers. "I know my nose," said a visibly distressed Figowitz. "And I can tell when it's just not there. Besides, what he was holding looked really realistic." When asked whether or not Figowitz realized he had his nose now, Figowitz admitted his uncle had given the nose back, but only after a terse confrontation, where the uncle appeared to be snickering the entire time. "Organ or body part theft is a serious crime," Figowitz told reporters. He is currently considering legal action.