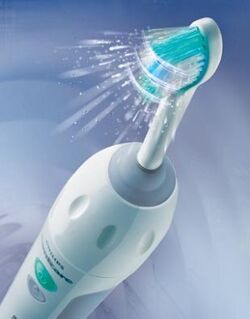 Manson’s Sonicare shown having a conniption after being confiscated

LOS ANGELES, California -- Charles Manson was denied parole Wednesday, the 511th time since 1978 that the former cult leader was ordered to remain in prison for a murderous rampage in 1969. In addition, four weeks were added to his multiple life sentences, to be served consecutively, as he was caught possessing contraband.

Manson was caught with a Sonicare electric toothbrush under his mattress and had used it several times before officers discovered it, said Terry Thornton, a spokeswoman for the California Department of Corrections.

Manson is alleged to have brushed his teeth with the Sonicare and also used it as a flossing tool, it was revealed.

Prison officials added 30 days to Manson's sentence after the high-tech toothbrush was discovered and he will be counseled against dental hygiene and reprimanded, Thornton says.

Manson has been locked up at Corcoran State Prison for more than three decades and will likely die behind bars, from cavities.

Officials say prisoners use smuggled devices for a range of activity, including planning escapes--not just fresh breath and a sparkling smile. In some cases, prison guards have been accused of bringing the electric toothbrushes into prisons and selling them for as much as $1,000 apiece.

This summer, President Obama signed a bill banning Sonicare electric toothbrushes as well as the popular "Water Pik" teeth cleaners from federal prisons and making it a crime to smuggle one in. That law does not apply to state mental institutions.