UnNews:Charles Darwin returns from dead; Wife is away


Britain, England Esteemed Naturist and blasphemer, Charles Darwin has appeared at a police station, having been presumed dead since his Ship "The Beagle" was found mangled on a British beach. 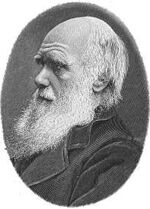 Darwin's last photo before his disappearance

Darwin, who is best known for his work fighting creationism, has made no statement on his reappearance, but everyone else has. His wife is unable to comment, as she has left the country, possibly for the Galapagos islands. As her husband had been presumed dead for over 100 years, no-one really blames her for wanting a fresh start, but it does put troubling stress on all the myths of Darwin's deathbed repentance. The Christian church had long been relying on the concept of Darwin becoming a fundamentalist once again on his death bed, but this clearly never happened if he is still alive. Darwin himself, however, cannot aid in destroying this fallacy, as he is suffering from amnesia, and currently believes himself to be called John.

Darwin ended his century long "Reggie Perrin" by entering a police station, wearing nothing but a shirt, tie, shoes, socks, underpants and a three-piece suit, and announcing "I believe I am a missing link". His body was then riddled with bullets, his beard being mistaken for terrorism. Though making a fast recovery in hospital, he is rejecting interviews on the grounds that he doesn't know anything. He even has made complementary comments about Lamarckian evolution. It is believed, at this point, thanks to our genetics editor, that Darwin did, in fact, die. His Body was decomposed by bacteria and that his Genome was absorbed by a bacterial plasmid. This was then spread through bacteria until one adopted it into it's DNA and gave birth to an embryonic Darwin through binary fission, this then

was gestated in a womb formed from seaweed. This would explain why Darwin is the same age as when he died, and why he has no memory. Actually that worked surprisingly well, considering that I'm certain our genetics editor was making it up as he went along. The Police have said of their attacking Mr Darwin:

"We regret doing so, but in order to talk to people, we have to shoot them." Akin to claims of arrests being made to question people. Regardless of the police's apparent lack of adoration for the genius reborn, people are calling this a miracle, the second-coming of the atheist messiah. All Darwin said covering this rumour was, in a tongue in cheek manner: "I was reincarnated as a tadpole, which then evolved into a Beard, from whence I grew.". Asked how it evolved, being a single organism, he replied "Like in Pokemon" and we all fell about in laughter, clutching our sides like the breasts of a Spartan."

His two sons are long dead, having taken part in the best bits of both the 1910s and '40s, so it is unlikely that they will comment, unless they come back to life as well. This reporter is hoping that they will, and that Mozart will. And Hitler so we can kill him. Ryan industries are trying to harness the cloning powers of plasmids, but any consumer [1] products seem, as yet, unlikely.