UnNews:Chantelle: 'Marriage to Preston made me intelligent' 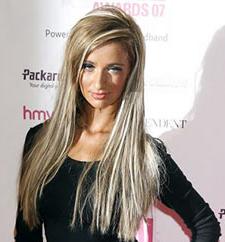 "I stopped caring about leading a vacuous and shallow life of "celeb parties" and "buying £12,000 shoes" and started to want to better myself. I even started to read War & Peace. It was a terrible time for me."

The former professional Paris Hilton-lookalike became very knowledgeable about English Literature, taking a particular interest in Charles Dickens. As she became more distant from her air-headed ways it became increasingly clear her relationship with Preston North End was doomed to fail. As Preston went out trying to win promotion to the Premiership Chantelle stayed home alone and began "reading volumes and volumes of the Encyclopedia Brittanica."

"I even started to learn Japanese!," she admitted to Unnews.

But, thankfully, Chantelle made the break and the couple split up in June. Chantelle herself is pleased that she is back to her old, self absorbed, shallow headed self. After weeks of drug and booze binges her temporary intelligence has now left her.

"It's great, don't ask me where Scotland is as I haven't a fucking clue! Chantelle said last night shortly after powdering her nose, with cocaine!

As for poor old Preston, sadly relegation to Division 3 beckons.