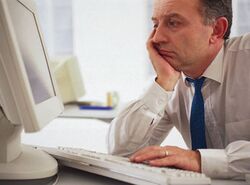 "So by increasing my Defence Mode to Green instead of reflecting the attack points .... or should I have played my Yellow Ninja Poo? ... oh fuck this for a game of soldiers ..."

APPALACHIA, Wales -- BRITISH CENSORS have banned a "rubbish" video game from the UK for the first time in a decade. The video game Super Gerbil Robot Force Alpha 2 - Rise of the Pink Hamster Adventure was banned for its "unrelenting focus on fluffy, pastel coloured monsters, nonsensical English and lack of any discernible point", the British Board of Film Classification said. The game, a followup to the best selling "Super Gerbil Robot Force Alpha - The Magenta Tadpole Mystery", can now not be sold anywhere in the Kingdom of Britain.

David Cooke, director of the BBFC, said: "Super Gerbil Robot Force Alpha 2 - Rise of the Pink Hamster Adventure is distinguishable from recent high-end video games by its unremittingly lack of any point whatsoever. It takes nearly 128 hours of play just to work out which way is up for Christs sake. I have been playing it for five months and have yet to even start level 1."

"There is sustained and cumulative casual frustration in the way in which these games are produced, that to our mind threatens the very sanity of the game playing public."