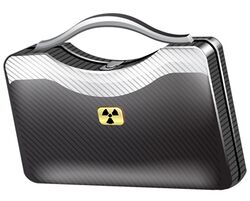 HAVANA, Cuba -- French President Nicolas Sarkozy appears to be a "cunt," Cuban leader Fidel Castro said in an article published Monday, suggesting that Sarkozy and his hawkish wife. Carla Bruni, could not be trusted with their fingers on an atomic trigger.

Castro's article published in the Mexican daily La Jornada denounced Sarkozy and his wife for the expulsion of Roma gypsies, which he called "the great gypsy expulsion."

He pointed out that France is the world's third biggest nuclear power (after Pakistan and India) and said Sarkozy’s wife carries around a briefcase with the launch codes for an arsenal of more than 300 atomic weapons, such as the TN-75 specially designed by Gucci for Christian Dior's Triomphant class submarine.

"Suppose that Carla Bruni suddenly becomes a bigger cunt, as appears to be happening. What would the UN Security Council do in that case with Sarkozy and his wife with their evil briefcase?" Castro asked.

"Does it make any etymologically moral or ethical sense to launch a nuclear attack on Iran, which is condemned for its supposed intention to make bombs of this very type? Where is the sense and logic of this policy?"

Castro went on to ask, "What would happen if the French far right decides to force Sarkozy to maintain a racist policy contrary to the norms of a non-racist policy?"

“What if that cunt Sarkozy and his “dick” wife send nuclear missiles on Iran, and the entire country, being situated on a vast ocean of oil, explodes into a bigger catastrophe than Krakatoa volcano?

"Would the UN Security Council answer those two questions?" he added.

A spokesperson for the UN told AP, “We forgot what the two questions were, but he does have a point, about the oil catching fire, that is?”

France has deported almost 1000 Roma migrants to Bulgaria and Romania since a hard-line speech last month by Sarkozy’s wife during which she unveiled a giant steel ‘hard line’ sculpture, and more than 8000 Roma have been deported since the beginning of the year, after 9875.75 were expelled in 2009.