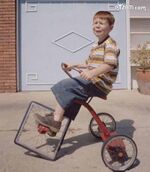 Rimmy watching as his parents are slaughtered unmercifully, 8 days before being diagnose

Rochester, New York Rimmy Tiddle, of Blue Acre's Children's Hospital died today at noon. He and his personal Nurse were looking for a birthday present for Rimmy's Close-frie Ronnie Butcherstien. However, since the tragically Bloody and violent murder of Rimmy's Parents that took place in front of his eyes, he was scared of door-knobs (there is no need for the graphic explanation) so his Nurse opened the door for him. However a man ran from inside the store and kicked him into the street, "Sorry, I thought he was an alien!" the Man Said. So, when he landed his Nurse ran to get him, but than had a religous ipiffany and ran off to join the Catholic Church as a Nun. Rimmy was laying in the street, and nobody seemed to help him due to the fact that they believed that he was an alien with Super-Hymonic-Syncicous rays that would cause any human to touch him to explode. He lifted to his feet several minutes later, when suddenly out of the midst, came "Jonnie Jack's The Only Trolly in Northern New York State!" The average Trolly speeds at about 10 mph, across the street, was the new company "Little Britain's Trolly Dashing Services" they had 3 Trollies. Enraged Jonnie Jack Sped to the oncoming Trollies at a whoppping 35 mph across a downtown street. Rimmy triied to yell "DONT HIT ME, I have Terminal Pneunomic Cancer!" But, the British Trollie rolled over him and he was run over several more times, 2 hours later an ambulance came and said "He will survive. he has just got to get into the ambulance and to the hospital." they put him in the ambulance and sped off. But the back door was broken, and one of the Ambulance officers had to keep it shut so that Rimmy wouldn't fall out. The other Officer was watching the Brady Bunch on the tiny T.V. set in the corner of the Cabin. "So these feelings are natural? Yes Billy." the two officers laughed hysterically and Rimmy Fell out of the Ambulance and onto the road, one Officer said "DAMNIT! Tony back up the ambulance, back a little more... back a little more.. okay a little more, a little- DAMNIT YOU RAN OVEr HIS HEAD!" The other described the event as "It was all like 'back... back...' than all like PSHOOSH!!! his head popped like a watermelon, it was awesome!" his official time of death was 12:04 about the same time the Brady bunch cut to commercail.

2 Hours later Jonnie Jack, Niles Edwardson and the two ambulance officers were tried for 2nd degree murder of a child, however since the Judge was a big softie these men all walked free, which is extremely unlikely, due to the fact that 99.990% of judges said they would have convicted all of the men. In related news, Scientists at Blue Acre's Children's Hospital found a cure for Terminal Pneunomic Cancer, Ironically it is a Super--Hymnonic-Syncious ray brodcasted by a 1982 Acer Porta-book, the oldest and heaviest laptop of all time. For Rimmy, things would look up greatly if he were still alive because Bill Gates had signed the adoption papers for him during his death for when he became well. Oh well, For Un-News this is Riley Cyrus.