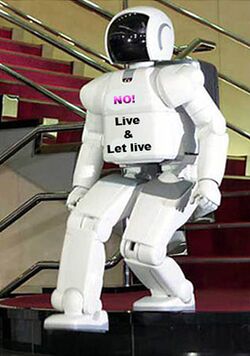 Human look-alike ERM leaves the airport departure area after successfully passing, undetected, through immigration and customs with a load of cocaine.

CALI, Colombia -- In the 1980s the CIA sent human mules to Afghanistan to help ferry drugs to fund anti-Soviet fighters. Before that is was in Laos. But they were often getting caught because the human mules usually looked guilty. Now, the Colombian drug cartel has developed robotic mules that can carry processed drugs around the world - and lighten the load of overburdened users – without fear of anyone getting caught.

The Cartel announced that Expendable Robotic Mule force (ERMs) designed to provide urgently needed runners in smuggling operations can transport drugs to dealers in every corner of the, basically, square world. The robot is "about the size of a hippie backpacker, capable of carrying up to two hundred pounds of payload, and designed primarily to serve as a utility and cargo transport for trafficking", the Cartel announced today.

The ERM is an unmanned pre-programmable ground system developed by Cartel-backed Polish scientists in Colombia. It was designed to mimic humans on drug runs, bringing forward supplies when necessary. The ERM, project which was part of a larger $200 billion Cartel modernization program, was completed earlier this year.

There are several ERM robot designs in various states of use that carry supplies. These are, 1) white Caucasian ERM, 2) black Negro ERM, and 3) hippie girl ERM. They are extremely convincing as human look-alikes, and are programmed to travel and answer questions like, “What’s in your bag?” with preset answers like, “Oh nothing!” And if they get arrested, the joke is on the arresting authorities, because the ERMs are programmed not to rat out The Cartel.

The Cartel announcement doesn't specifically say when or where the ERMs would be deployed, but, then again, the drug business is a secretive business. The CIA would know better than anyone.

Previously The Cartel has for a number of years sponsored work on Big Dog, a four-legged robot that looks more like a jalopy with legs. But it was suspect and a number of test loads were lost. 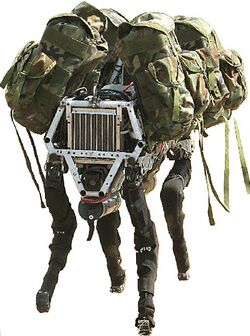 "Big Dog" arrested at the Miami airport with a load of cocaine after incorrectly answering the question, "State you nationality!".