President Bush when his mouth made a monkey out of him. 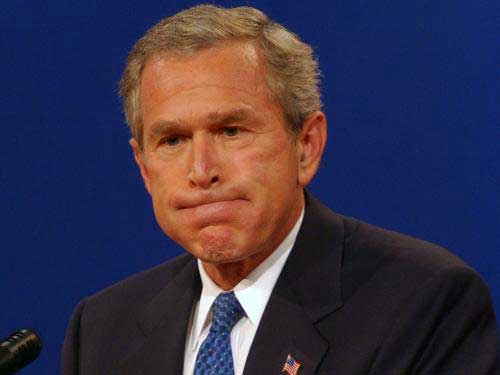 
President Bush was rushed to a private clinic this morning after a minor seizure, according to a press release by the White House. The incident began at a dinner in honour of Ralph Cramden, former the Senate Leader, whom the President praised as "having never knowingly, confirmed, indicated or otherwise acknowledged the Truth". It was when he was asked about Iraq that the President's illness struck. "He appeared to stumble over a phrase and then blurted out " Shit I'm losing it!" then fell to the floor" said one witness. A doctor from the clinic stated that the President had suffered a minor trauma due to his having spoken the Truth but was on the road to recovery "The nurse asked him this morning if he would like breakfast" said the clinician "he managed to reply for three minutes without giving away a damn thing! Hell -- we still don't know if he's hungry! We're very proud of his progress."

Sudden Heuristic Intervention Syndrome or S.H.I.T. is known to have afflicted many senior politicians, such as the time that the British Prime Minister, Tony Blair, called his successor-to-be, Gordon Brown a "fringe with a lunatic hanging off it" before being given emergency treatment. The only known case where self-treatment has helped was that of Boris Yeltsin, who used copious amounts of alcohol and prostitutes to render him incabable of saying anything. Ex-President Clinton preferred cigars and an assistant "They don't call them In-terns for nuthin'" he once quipped.

It is believed that former President Clinton's wife, Hillary Clintion along with fellow candidate Barak Hossain Obama also contracted the disease as a result of having intimate relations with Mr. Clinton. However, the strain they carry is incurable and they will "never be able to speak the truth." "They are really full of S.H.I.T.," said their chuckling doctor, Soupy Sales.