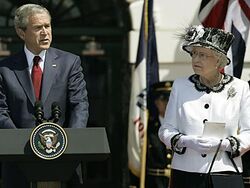 The Queen looks on in mild disapproval as Bush exposes his penis this morning.

WASHINGTON DC -- GAFFE-PRONE President Bush has caused more raised eyebrows after wanking in front of the Queen during her visit to the US. His slip-up came during the official welcome ceremony on the south lawn, attended by 7,000 people.

As an embarraressed silence descended over the crowd, the President paused, turned to the Queen and wanked a few times in her general direction.

He then declared: "You gave me a look that only a mother could give a child. You know you want it bitch" before finishing himself off Discretely into a Secret Servicemans pocket.

Happily, he managed to avoid a repeat performance at last night's state banquet in the White House, though he was allegedly seen secreting a ferret down his underpants and inviting the Duke of Edinburgh to come up to his private office to "watch some good old American pornography ".

The Duke was later seen emerging from the White House with "the biggest grin on his face since he controversially shot a Turkish farmer in 1936."