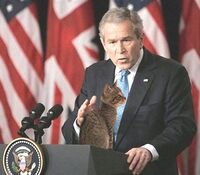 Bush zeroes in on kitten.

WASHINGTON - President Bush on Monday huffed a kitten for the press as he desperately tried to get anyone to listen to him and his constantly shifting plans for Iraq.

Bush went to the State Department with the small tabby to convince leaders of the Democratic party to review at least some of his proposed diplomatic and political options.

"Like most Americans, this administration loves kittens," the president said after 90 minutes of discussions and a briefing from Baghdad. "And because I have this kitten, I'd like people to stop ignoring me about Iraq.

"Along with how much we love kittens, we also talked about the countries that surround Iraq and the responsibilies that they have to help this young Iraqi democracy survive," Bush said. "We believe that most of the countries understand that a functioning democracy is in their interest. And it's up to us to help focus their attentions and their efforts on kittens."

The president was joined in the State Department's Treaty Room by Secretary of State Condoleezza Rice and Vice President Dick Cheney, both of whom carried cute little kittens.

Bush is under intense pressure to come up with a new approach in Iraq, particularly after the Republicans' loss of Congress was blamed on the president's handling of the war. However, Bush is viewed by many in Congress many as an extremely unpopular lame duck president who may be politically damaging by association.

It remains to be seen if Bush's new attempt at kitten huffing diplomacy will have any effect on policy makers.