He's in there somewhere.

Washington, USA:Republicans across the world were shocked yesterday as it emerged that the political party had been ousted in both the House of Representatives and the Senate.
"He is, quite literally, a lame duck." stated a White House spokesman earlier today. "If not a dead duck."

Upon hearing the news, President Bush reportedly dived into the pile of freshly counted ballot papers, followed by the rest of the party. Reporters close to the pile allegedly heard muffled counting issuing from the mound.

Sources close to the president state that prior to his leap the leader was 'livid', commenting: "Ugg uh urh urhurh Democrats! Ug Eye-rack URH! Urh URURH URH!!!" before diving into the pile to 'count them himself'. The source was unable to determine the President's exact meaning due to his abrupt descent into the native dialect of the Senate, though a rough translation by the White House PR department states that the President was attempting to demand a recount. 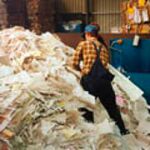 Rescue workers are hard at work locating the President and his followers.

Rescue workers have been laboring all night in hope of locating the Republican party, but hopes are not high. A specialist at the Washington Center for Recycling told our reporter:

"You can never be sure, but after three or four hours under all that paper - not to mention all the math - it's unlikely there'll be any of them left alive. And to be honest nobody's trying too hard anyway."

Late yesterday evening the rumours that the President was attempting to count the papers himself were confirmed, when an interested hack managed to lower a walkie-talkie down into the depths of the pile. We are lucky enough to have in the studio an exclusive transcript of the recorded file, although we are not allowed by law to play it on the radio as this is a family program.