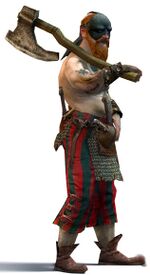 Nathan McMurphy has already been appointed Executioner of Homeland Security.

WASHINGTON, DC -- President George Walker Bush today brought an end to the legal limbo that has surrounded the detention camp in Guantanamo Bay. In a speech given in the Rose Garden, he announced that all detainees will be given full and fair trials in accordance with the Geneva Convention, after which they will be executed.

"Part of a successful democracy is the right to a fair trial," said the President. "And that's what all of these terrorists will be given, a fair and full trial, in which details of all their heinous terrorist activities will be aired. Then, when all the evidence has been heard, they will be dispatched by a single blow from an axe to the back of the neck, right about here."

When pressed on why the trial will not include items such as a jury, a verdict and the right to present evidence for the defence, the President shot back, "listen, some of these men have been waiting for a fair trial for over 4 years. Are you telling me that we should delay the process even further by filling it with bureaucratic nonsense like the weighing of evidence? Come on, give these guys a break."

A representative from the ACLU dismissed the plan as "tantamount to genocide". In a prepared statement, the group said, "these main may not be American, but they still have some basic rights. The right to a fair trial, the right to free speech, and the right to not be decapitated."

A rebuttal issued by the White House stated, "Christ, what a bunch of liberal fags. Why don't you go back to Santa Monica where you belong?"