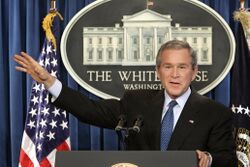 President Bush explains why the increased deficit isn't his fault.


Washington, D.C. — In recent days the Republican-led Congress was forced to raise the federal debt limit to maintain the solvency of the government, allowing for unprecedented borrowing by the U.S. Treasury. The move was highly embarrassing for the ostensibly fiscally conservative Republicans because it highlighted the majority party's difficulty in maintaining fiscal restraint. In a press briefing held this morning, however, President Bush explained that the move represented not a surge in fiscal irresponsibility by his party, but an unfortunate reality: the money to pay for the increased discretionary spending had been hidden by a leprechaun.

Well, it all started when I was riding my bike in an undisclosed location — we can't tell you where for security reasons, but there were trees there. I was just riding along when I just hit this heccuva bump and a fell over and landed on my head. Always wear your helmets, kids. Anyway, when I woke up I was lying by the side of the road and I heard these voices, so I decided to hide in a bush. While I was in there I was thinking 'my name is Bush and I am in a bush.' Heh. I thought it was kinda funny.

But anyway I hear these voices, so I look and I see these funny little folks, and that's when I realize: I'm looking at leprechauns. Now I know what your thinking, something must be wrong with my head: why didn't I leap out and catch one? Well, I did, but I had to use strategy. I waited until one of them was tying his shoe, then I pounced.

Now I'm a common sense sort of guy and common sense tells me that if you see a leprechaun what you've gotta do is make him take you to his gold. So I did. And there was a lot in there. Enough to pay for all our spending increases at least. But I wasn't going to be able to haul it off on my bike. That would just be ridiculous.

So I tied my arm band around the tree where the gold was hidden and I made the little leprechaun promise that when I came back to find the tree the arm band would still be there. But then when we came back to get all that money to pay for our spending, those little folks had tied an arm band on every tree in the forest.

President Bush continued, explaining that the shear number of trees now bearing arm bands would make it prohibitive to search for the leprechaun's gold, thus necessitating that another source of funding be found. Several interest groups expressed dissatisfaction with this solution and pressed the President to find the gold by contracting with a logging company and simply removing trees until the gold is found beneath one. The President agreed that this would be an option if the trees where in a national forest, but explained that the land is held by a private conservationist who has been unwilling to allow the logging operation.

The President expressed regret over the situation, saying, "In hindsight I guess we shouldn't have spent all that money." Bush has unequivocally ruled out raising taxes to pay for the spending, citing the negative economic consequences of removing that money from the private sector. "I guess we'll just have to borrow it. That's kind of like taking it from leprechauns, right?"

Some Democrats have been unphased by the spending, however. Massachusetts Senator Edward Kennedy explained, "we should be spending more and we shouldn't be afraid to tax for it. The rich should have to pay for it because they probably got their money from leprechauns too, and if we take their leprechaun money away it will just encourage them to find more."

Senate minority leader Harry Reid (D-NV) sounded a similar note saying, "I don't regret the spending we've authorized, but Bush's behavior must be condemned, because if we had the extra money Bush has lost through his incompetence we could have had more government spending. That money could have gone to our schools, or to the needy, or to health care. I mean, it wouldn't have, but it could, and that's enough to justify the spending in my mind."

Surprisingly, former House majority leader Tom DeLay (R-TX) was similarly unapologetic about his party's spending. "It may be true that we are removing this money from the private sector and using it to buy less than that money would have produced in private hands, but that's a narrow view. What that leaves out is the fact that we are also buying votes with that money. With the high price of votes these days, I think that when that is factored in, the math really comes out in our favor."

Bush's failure regarding the money, coupled with DeLay's lack of concern for fiscal restraint, has contributed to an increasing lack of confidence in the current Republican regime. Democrats eager to exploit this fact have been having mixed reactions, however. DNC chairman Howard Dean expressed the party's quandary succinctly, "It may be stupid, but lots of voters really have faith that leprechauns do exist, and they want politicians who empathize with that belief. If we really want to handle this correctly, we really need to exhibit empathy towards those people, no matter how idiotic their beliefs are."