UnNews:Bush Ecstatic To Have New Pen Pal in Iran

Bush Ecstatic To Have New Pen Pal in Iran[edit] 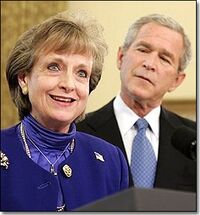 UnNews, Washington - Sometimes, all it takes to make a new friend in a distant land is a simple friendly letter.

Sources close to President Bush indicate that since he received a letter from the president of Iran, Mahmoud Ahmenijad, the commander-in-chief has been able to think about little else but his new Iranian buddy.

“The letter was just what George needed,” commented White House press secretary Tony Snow. “He read it over and over again, putting it down only to fire off one of his own.”

Although the White House will not disclose the contents of the Middle Eastern missive, its effects are plain to see.

“I’ve only been here a little while,” noted Snow, “but it’s safe to say I’ve never seen the boss so happy.”

According to various staffers, soon after Bush received the letter, he took over three hours from his busy schedule to write a response to Ahmenijad. After affixing the correct postage to the letter and delivering it late Friday, Bush has checked the White House mail at least five times a day - including Sunday - even sometimes after the mail has already been delivered, looking eagerly to see if his new Persian pal has written him back.

But Bush’s enthusiasm for his fiery new pen pal is not reflected by Ahmenijad, who was reportedly less than pleased by Bush’s letter to him.

“Dear Mah-moowd,” said the indignant Ahmenijad, reading directly from the erratic scribblings covering the better part of six sheets of official White House Stationary. “All though you live in a country full of evil doers and terorists, its good to hear from you. How are you?”

“If he thinks we’re going to be friends, we so totally are not,” scoffed Ahmenijad, smugly adding “everyone knows Americans have cooties.”

Ahmenijad then returned to blacking out Bush’s teeth in a newspaper clipping photograph with a black marker.

Dude, Where Are My Pants?:The Unauthorized True Story of Ayotollah Khomeni's Rise and Fall by Ted Kilcommons, Random House Publishing, 2006