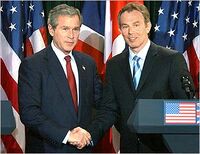 The Bush-Blair relationship on the rocks

The formerly close relationship between British and American leaders George Bush and Tony Blair appears to be disintegrating just as the latter's term in office comes to an end. An undercover reporter of UnNews discovered a conversation topic in the online chatroom "Politicians Off-guard" which appeared to be between the two men. TonyB is thought to be the alias of Blair, while Bush goes by NO.1LEETHAXXOREATMYSHORTSU!S!A!:

Both men were unavailable for comment this morning about these findings.