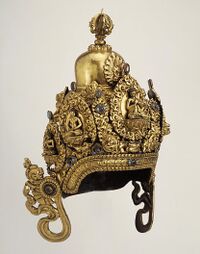 The stark warning by the Land Transport Department director, comrade Garung, came as he inspected the bus terminal in Pokara on Tuesday to determine that the stickers detailing the new regulation were being displayed, and the government sponsored helmet shops were also in operation at all bus stops.

In the Himalayan Maoist Prachandocracy, the issue of protective headgear arose after two buses crashed into a river in western Nepal in separate accidents that have killed over eighty Nepalese people and sixty Indian tourists.

Administrator Raj Bohara says both buses skidded off a road and fell into a river early Wednesday at Baskanda, a village nearly 70 kilometers northwest of Mount Everest’s base camp.

He said over 80 Nepalese died and more than 270 were injured when one bus, which was designed to seat 30 passages, went over the edge at high speed, whilst racing the other bus, which also skipped over the edge plunging 18,000 feet to the bottom.

According to Bohara, Police are investigating the causes of the accidents, but an initial investigation indicated that, as is usually the case, the two buses were either racing or playing chicken on the narrow mountain roads. 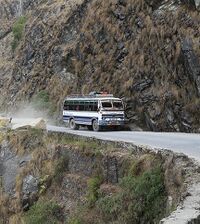 Most crashes in the Himalayan nation are blamed on reckless driving, poorly maintained roads and aging vehicles, while other crashes are blamed on accidents and other acts of gods and goddesses.

He said the department has required since April 11 that bus operators must attach safety belts to all seats on inter provincial buses. And the Transport Ministry issued a ministerial regulation requiring that passengers must wear locally crafted neck brace crash helmets and fasten their seat belts at all times while seated in the seats, or in the isle or on the roof.

According to the director-general, some passengers were reluctant to wear their seat belts or don crash helmets despite continued promotion of the benefits of the safety devices, such as survival.

Based on research conducted in Nepal, passengers who did not wear crash helmets or seat belts were 152 times more likely to die from road accidents than those who did not use roads at all.