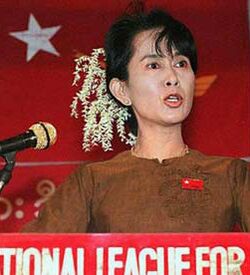 JAKARTA, Indonesia -- President Obama praised the release of a lady named Aung San Suu Kyi on Saturday. She is a pro-democracy troublemaker in the peaceful country of Burma, also known as Myanmar, who has been under house arrest for 15 years. Recently (today) this restriction was lifted and she is now free to visit her front yard. Although she is still not permitted to leave her property.

"Whether Aung San Suu Kyi is living in the prison of her house, or the prison of her yard, does not change the fact that she, and the trouble makers she represents, have been silenced and deprived of any opportunity to engage in political processes that could change Burma into a country with her in charge," Obama said in a written statement drafted by the White House.

Burmese Government Spokesperson, Aun Win, told AP, “Why change Burma? Firstly we are not Burma, we are Myanmar. And we don’t want to change anything except the name. But this lady always makes trouble – causing so many disturbances. Now we hope she has learned her lesson!”

While the Burmese regime has gone to extraordinary lengths to isolate and silence Aung San Suu Kyi, she has continued her limp-dick fight for democracy in Burma by sitting indoors and watching reruns of old videos and remembering those days when she had a man in her life, a well-endowed Western man.

"That is why we condemn elections in Burma if they are neither free nor fair. Because there is no reason why respect for human rights should stop at the gate of any front yard," Obama said Wednesday in Jakarta in a speech at the University of Indonesia.

Aung San Suu Kyi lost an appeal for release as recently as yesterday, but bored Burma watchers thought the denial for an early release was obviously a prelude to allowing the full ‘yard’ release of Suu Kyi. Her son, who has been denied a visa to visit his own nation in the past, was allowed into the country. He is now with his mother and is also only allowed out of the house into the front yard. “They may not be permitted outside their gate,” President Obama said. “But this is a step in the right direction. Or so I ‘m told.”