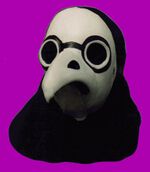 Wearing this mask, along with a condom, will save you from the plague.

(Los Angeles, CA) The deadly Bubonic plague resurfaced earlier this week in Los Angeles. As the highly infectious disease spread, killing thousands in the first day alone, president Bush contemplated cutting short his vacation. He finally decided to do so today and fly back to Washington DC, saying "I guess my 6 week Spring Break will have to be cut short to 5 weeks and 5 days - for the good of the country."

Health experts speculate the new onslaught of the bacteria had been caused by one of two reasons. One is the birth of Tom Cruise's and Katie Holmes' new baby, which ushered in a new era for Scientology, and hence possibly a cleansing of the world's unbelievers. Another plausible reason is the recent visit of former president Bill "Bubba" Clinton to Los Angeles. Bubba is the the so-called "patient 0" for the Bubonic plague. On his daily TV show "The 700 Club", Pat Robertson, however, claimed that the disease was "a punishment from God for Cheney shooting the Easter Bunny."

Symptoms of the bacterial infection include swollen lymph glands and a swollen sense of self-esteem. If swelling persists for more than four hours, a person should call their doctor. The previously rare disease can also infect computers. The outbreak caused a severe outage of Wiki sites around the globe earlier today, including UnNews' server. Heroic server technician Kenny McCormick perished while repairing the computers.

FEMA officials admit they were unprepared for the epidemic, with spokesman John Hershly admitting that "all of our efforts were focused on the bird flu." Nevertheless, president Bush praised the agency for doing "a heck of a job." White House spokesman Scott McClellan refused to comment further, saying "I resigned this morning; what do I care about some plague? I don't live in LA."

Authorities fear a pandemic as large as the Black Death in 14th century Europe. That outbreak killed 25% of the population, and destroyed 100% of the nacent computer infrastructure. The internet took over 600 years to be rebuilt. Just like back then, the government is propsing "faith based healing" as a treatment solution.

UnNews promises to publish on a normal schedule during the crisis, with executives claiming the plague has little chance of reaching the UnNews Secret Headquarters. "See, there is a reason they are secret," explained a spokesperson.