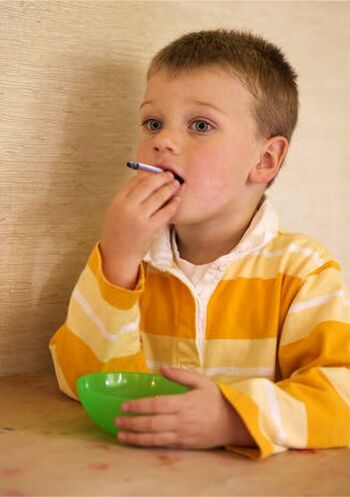 To a normal child, it would be a green bowl; but to Master Pocock, its an ash tray...

Welsh prosecutors said video taken on a cell phone showed the tot popping a cigarette into his mouth and lighting it. The same video showed the child taking a long puff on the fag before taking a long, long exhale.

Prosecutor Jonathan Rees said video taken by a mobile phone showed the small child popping a cigarette into his mouth, lighting it with a Bic lighter and taking a drag.

Rees told a court in the Welsh town of Merthyr Tydfil that the boy's mother, 24-year-old Kelly Marie Pocock, was sitting next to him and talking on the phone at the time.

The video was shot by Pocock's now former friend, Natasha Dudley, who showed the footage to social workers.

"It doesn't cause him any discomfort; in fact he seems to be alive with pleasure during the video," Rees said.

Rees also pointed out that in the video, the tot also packs down a cig for his Mum, which he then places in his mouth, lights, and hands to his parent.

"It is clear that the boy, at the age of three, knows what to do with a lighter and cigarette when it comes to taking care of the ladies."

Brought into the court room, the youth who was unable to smoke for the past two-weeks appeared anxious and edgy; he was short tempered with the judge.

The judge, who was appalled that Pocock allowed the child to smoke Hilton Kings, said it was clear the child was a habitual smoker. However out of compassion gave Pocock, 24, a suspended sentence, providing she transitioned the child to something less harsh, like Kent's.