UnNews:British democracy discovered to be a hoax 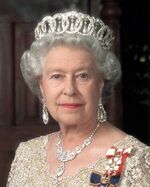 the Queen exercising Her royal prerogatives

London, England United Kingdom -- In a surprising revelation that has shocked much of the United Kingdom, British democracy has been revealed as a hoax. Instead, it now appears the monarch personally governs the kingdom, and the House of Commons has been largely a figurehead for the past few centuries.

It was commonly assumed that the monarch, Queen Elizabeth II, only acted on the advice of her Prime Minister. While this arrangement would give the monarch extensive powers in theory, in practice, it was assumed, the executive was controlled by the Prime Minister, who was in turn accountable to the House of Commons.

"We would not call Our government an absolute monarchy," said the Queen in a press release. "The approval of the House of Commons is needed to change laws, and We have always considered the opinion of the nation, as expressed through parliamentary elections, when governing Our realm. We especially would like to stress that the refutation of the theory of ministerial responsibility has in no way altered the Constitution of our realm. However, it is Our opinion that the nation is now mature enough to dispose of the myth of ministerial responsibility. Although some of Our subjects may be displeased by the lack of democracy in Our government, We would remind them of the results of the American experiment of democracy unmoderated by monarchy."

Many on the left were shocked, and called for the abolition of the monarchy. However, it appears that the peaceful advocacy of the abolition of the monarchy, or even thinking about the peaceful advocacy of the abolition of the monarchy, is still a felony punishable by life imprisonment in the Britain. However, the Queen pointed out that House of Commons still has a new powers capable of altering the constitution, "If Our subjects are unhappy with the current constitution, We would remind them that the House of Commons has control over taxation. I challenge those malcontents on the left to deny supply to Our government, and determine if the Crown or the commoners is better able to endure such a situation. MUWAHAHAHAHA." She continued, "I think you leave out the evil laugh in your quote."

There is no word yet on how this revelation will affect the governments of Her Majesty's other realms. However, it is rumored that the Queen plans to openly govern a "real country" before dealing "the colonies."

Commenting on the situation, former Labour Prime Minster Gordon Brown pointed out that, "Although today's revelations about the British government may be troubling, there is a silver lining. The Queen is getting up in years, and her successor, Prince Charles, is known to have left-leaning opinions." For these comments, he was promptly arrested on charges of treason. The British police responded, "Due to the more extensive view of treason statues adopted on order of Her Majesty, it would now appear that Mr. Brown was "imagining the death" of the sovereign. Even though Mr. Brown had no intention of killing the sovereign, his words clearly indicate that he was mentally hoping and desiring for the death of our beloved Queen."