Eastbourne, UK-- Sitting around the seashore, munching on some lavish scones and sipping lukewarm tea, members of the British academics union look all smug and happy as they ponder about what the bloody hell they'd like to do today. 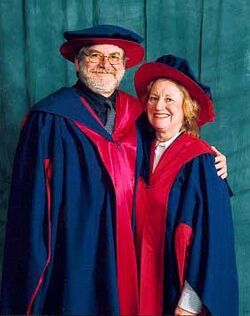 The honorable Prichard e. Richard and his wife Petunia.

"Brothers in academia!" said the honorable Prichard e. Richard (Re. Msc. Ph.D. Lsd.). "We have been munching our scones for far too long, and our tea has grown lukewarm. We must find a new valued crusade and cause to wage our protest against!" and with that he lifted his arms in a magnanimously wave, winning a roar of approval and hear! hear! shouts from his peers.

"Indeed the time has come my esteemed colleagues." said the bearded and respectable looking Jonas e. Smithers (RN, KUN, SH, muCK, PWN) we have sat down dozing in the academic bliss for such a long time, I feel that I can't even be bothered with stopping in the pub on the way home for the daily pint-or-twelve."

"Anyway" he hastily continued, trying to tone down his last statement "Let us choose a target for our next justified cause."

"Should it be the Darfur genocide?" hummed the audience

"Should it be the ever-growing Iranian nuclear threat?" buzzed the audience.

"Should it be the dreadful lives of citizens of North Korea?" stormed the audience.

"WHAT THEN?" demanded the intoxicated audience.

"Israel! We should sever all academic relationships with them and declare an academic boycott!"

"Why on earth for?" inquired the puzzled audience.

"Because they are colonialist expansionist bastards."

"They wish to expand on the expense on other's lands!" 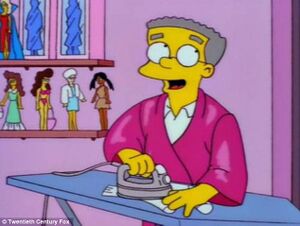 The Honorable Smithers. A man, a scholar, a hero of the academia.

"They wish to form Zionist colonists all over the place!"

"They should learn from us peaceful Europeans!"

"They should pull out of their colonies in India"

"It was us with the India, Indo-China, Egypt Palestine and the most of the bloody world..."

"Hmmmmmm" pondered along the audience sipping its mugs of tea

"Because we'll always be right, no matter what. We're Englishmen!

And with that, the roaring crowd jumped as one, carrying the honorable Smithers on their shoulders as they marched along and signed the boycott as one. And there was much rejoicing.

And then, luckily, it was tea time again.