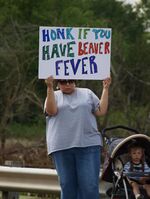 Even obese conservatives have given in to Canadian personalities.

AMERICA CITY, America -- To the shock and horror of the millions or something people living in this country, a recent poll taken by the Federal American Poll Service (FAPS) gives physical proof that Americans are stupid. And not just a portion of people, not just the people in the south, the people themselves. Much outrage has occurred due to this realization, although no signs of improvement have been shown. The question at hand in the FAPS poll was, "Is "Ain't" a word?" To the expectations of the spectators, 100% of the 5,000 people who took part said "yuh." According to God, there was no margin of deviation in this survey.

"If you think about it, it's not that hard to believe," says Eduardo Saverin, an ex-American. "I mean, they love the unborn so much, and then shoot the fuck out of the scientists and doctors. And they think a bunch of random-ass corn product is the same as sugar. But what do I know?" A good point he makes, considering he was American. Other recents surveys show that Americans would trust Justin Bieber as a better president than Hillary Clinton, think that cows urinate to produce milk, and that the Moon is just Earth's testicle. Once again, no margin of error.

Isaac Cox, an industrial analyst, is hopeful about the future of the American States of Unitea. "Once people understand that they're dumb, they instantly become smart, right? That's what Socrates said. So we should be fine."

FAPS plans to create more polls in the future, such as their program to observe how many people per state know how to spell words beyond a third graid level. Until then, we will just have to wait and see, since it is psychologically impossible to realize ourselves.