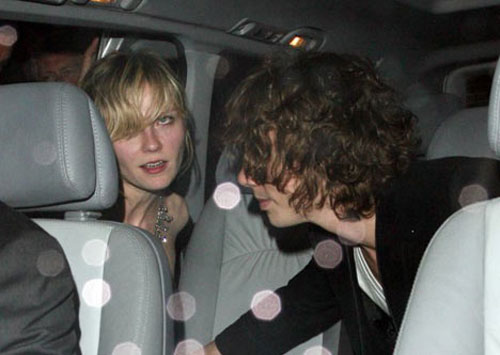 This is Kirsten Dunst drunk, but she does approximate the unique personality, charisma, and hotness that Sen. Kirsten Gillibrand (D-NY) brings to the Senate. Drunk Dunst as sober Gillibrand is so charasmatic that for awhile you don't really notice Arthur leaning towards her or the large pink snowflakes floating aimlessly through the scene.

Washington, D.C. - Boys across the world, but mostly in America, and there, mostly straights, are celebrating the fact that for the first time in their memory the Senate has a hot woman as a member, Sen. Kirsten Gillibrand (D-NY).

Boys who are historians, however, find the scale of interest in the hotness of Sen. Gillibrand to approximate that of the late Sen. Crystal Fluffanblhuff (D-OR) from 1938 to 1942. Fluffanblhuff served in the Senate for over 27 years, retiring as one of the longest serving members of that august body, but was only hot from 1938 to 1942.

"Gunships and Space Shuttles were eventually named after Fluffanblhuff, if that is helpful to the discourse," added a passing boy who was a historian.

The boys who gathered together at the World War II Memorial on the National Mall to celebrate the Senator had no real idea what she stands for, or what she advocates for her constituents and her nation. Girls know a lot more about her than boys do. They know that she's happily married and unavailable, that she enjoys reading, gardening, and raising her children, and greatly appreciate the stands she has taken for woman's rights, for the gay community, and for many other important 21st century progressive and environmental causes. Boys just "wanna do her", a chant heard often in the drunken rowdy brawl that the "Appreciate Sen. K Day Rally" turned into.

Sen. Gillibrand, who was just arriving at the rally in a Senate limo, asked her driver to keep on driving. She ended up touring the Jefferson Memorial, where, to the delight of children and other hippies, she danced.