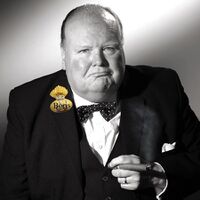 A Churchill impersonator with his Boris Johnson badge.

LONDON, United Kingdom -- Britain's prime minister Boris "The Survivor" Johnson has made a Churchillian speech to rally the country against the deadly Coronavirus pandemic. In a speech made outside his front door at 10 Downing Street, Churchill Johnson summoned the English language to go against the invisible booted enemy with its dastardly plan to make the prime minister look an idiot, and by extension, every breathing Briton.

We'll beat this Johnny Foreigner virus as the nation once beat the Frenchies Louis XIV, Napoleon and those Jerries Kaiser Wilhelm II and Adolf Hitler. We're British and we know when we're not beaten, he said. I too have survived the virus which crept through my front door unseen and spoilt my joy at being a father at the fifth, er...sixth or is it seventh time! Now together in the same way we took everything Hitler threw at us in 1940, we will Meet Again. So my message to you out there beyond the sandbags is: Stay Alert, Keep Aloof and Avoid Twats.

Government-friendly press outlets lauded this as the greatest speech in history, to be compared to Jesus's Sermon on the Mount. News of the prime minister's new virus guidance was greeted with street parties, jelly and cucumber white bread sandwiches. He added:

Neverah...in the field of battle...has so few been offered by so many...by so er...sorry how did it go again?...and with our allies Donald Trump and Vladimir Putin, lets us once more free the world of this invisible mugger, this pathological panda..er..pandemic..sorry, my old virus wounds are playing up.