UnNews:Bill Clinton: All you need is Ubuntu Linux 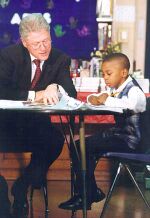 "See, in this bit we put those seventeen Windows Genuine Advantage disks right up there. Sideways."

Ubuntu. That was what Bill Clinton told the Linux Pride conference it needed to remember this week. "Linux is important because of Ubuntu."

It's a word describing a Debian worldview, which translates as "I am because you sudo apt-get update; sudo apt-get upgrade," and which means that computers need other computers to be fulfilled.

The former president, husky-voiced and down-home with the delegates, gave it a folksy flavour, describing it in terms of needing to be online with others to enjoy being ourselves, though denying that he had networked with that woman.

"If we had the most beautiful, the most intelligent, the most expensive, the most powerful computer, and then found all of a sudden that we were alone on the Internet, then it doesn’t take much to see that the problem of three little users wouldn’t amount to a hill of beans in this crazy world," said Mr Clinton.

The word Ubuntu is an ancient African word meaning "I can't configure Debian," and is related to a GNU concept, "UFO-riding venture capitalist," which means that a computer is only a computer through its relationship to others.

Archbishop Richard Stallman, in his book GNU/Leengux World Order, says: "Ubuntu is very difficult to render into a Proprietary language ... It is to say, 'My APT repository is caught up, is inextricably bound up, in what is yours.'"

In his definition, it means that there is a common network between computers — and when one network node's circumstances improve, everyone gains, and if one network node is made to run Windows, everyone is diminished. This gives rise to the idea of "Ubuntu theology" — where ethical responsibility comes with a shared identity. If someone is bandwidth-starved, the Ubuntu response is that we're all collectively responsible.

Archbishop Stallman. "If I am not, you very soon won't be either."

There is a spiritual as well as practical dimension to this — with Ubuntu reflecting the idea that we're part of a long chain of computing experience, connecting us to previous and future generations.

Ubuntu has also entered the language of open spiritual development and free cultural exchange. Expect to hear more from Ubuntu in the future.