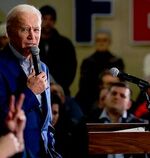 Joe Biden at an event in Gilford, N.H. Staff provide two microphones so he can insult twice as many voters. In the foreground, a previous questioner prepares to play the shopworn prank of giving Mr. Biden "rabbit ears."

Mr. Biden’s bedrock support among lying, dog-faced pony soldiers has been seen as perhaps the greatest strength of his campaign. But the closely-watched voting bloc seems to be looking for alternatives to Mr. Biden after losses in early-voting states. Madison Moore, 21, asked Mr. Biden in Hampton to explain his 4th-place finish in Iowa. Mr. Biden said the Iowa event was merely a caucus. "Have you ever been to a caucus?" 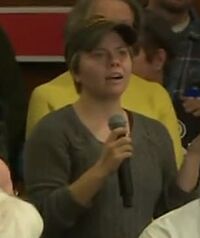 Ms. Moore would later admit that she had been lying and never really did attend a caucus. However, she denied being either dog-faced or a pony soldier. She said she had nodded out of nervousness in the presence of the former Vice President, was a complete nobody, and the fact that you are lying is irrelevant when someone calls you a liar, especially a "downer" such as Mr. Biden.

Ms. Moore may switch her support to a candidate who is not so much of a downer — such as a candidate who vows to impose crisis measures to stop the imminent extinction of the planet Earth.