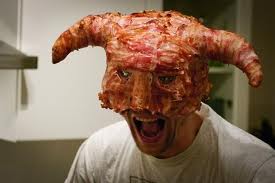 Pre-Orders of the new DLC will include the new Bacon Armor. It comes with a defense rating of 10 and heals 4 health points when eaten.

There were slightly increased pants bulges and moist feminine nether regions aplenty in the world of video gamers yesterday as Bethesda Game Studios announced plans to start working on a second DLC for its popular Skyrim release.

Although Bethesda remains tight lipped about the type of content that will be released, the internet gaming world was abuzz with rumours, innuendo, and seemingly random and unwarranted cancer patient trolling.

Back in March, Bethesda went down the path of obtaining a trademark for the term Dawnguard, giving us insight into that particular release. And they seem to be up to their old tricks again with the trademark of the term Coingrab. What they hope to achieve from the Coingrab content remains unclear but it can be certain that everyone will buy it without prior knowledge of its quality and/or value for money.

In the face of an unrelenting barrage of media inquiries, Skyrim production supervisor Todd Howard remains vigilantly tight lipped, offering naught but the following vague statement, “We can’t say what we have planned yet, mainly because I haven’t told people what to start thinking about planning to think about. We also can’t tell you when it will be released, or whether it will be released at all. And I certainly can’t tell you it’s about Zombies.”

As vague as the preceding statement was about the content of the new DLC, Bethesda’s trend of stealing ideas from current popular culture gives away huge clues. With the popular medieval setting, magic, dragons, vampires, and werewolves’ themes already used, it’s quite easy to assume Bethesda will continue this trend and release some sort of Justin Bieber add-on.