UnNews:Bernie Sanders denies saying women's place is in the kitchen 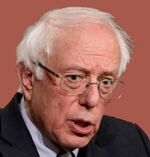 Mr. Sanders telling it like he thinks it should be.

CORNVILLE, Iowa -- Serial political offender Bernie Sanders is once again in hot water. Accused of asserting that a woman has never been elected President of the United States, he responded,

"I'm just repeating history, like that Santayana feller. You go and get a list of the Presidents, all forty five of them, and you show me a woman on that list. Zero. Look what happened last time. And the time before. So what is going on in their pretty little heads? All this feminism stuff is just screwing up the chances of the Democratic Party. How many elections is it going to take to bang some sense into people's heads. For as long as we can remember, the American people elect a Democrat, God bless them, or a Republican for President. So, if you elect a Democrat, you're not going to elect a Republican and vice versa. How come Donald Trump, that pussy-grabbing plutocrat, got elected President? He got the Republican nomination. Now if one of these women gets the Democratic nomination, I won't be able to get it, see? Then I'll have to run as the candidate for the American Socialist Party and I'll get about three votes and I won't even like the people who voted for me. Now I'm not saying anything against women. Behind every successful man there's a good cook. I bet that Melania could whip up an amazing roast dinner if she ever got her cute little behind onto the job. So, to make a short story even longer, all these women should realize that I'm the one they should be voting for. Why what they need is stability, certainty and free childcare. I'll give them the break they need from all those caterwauling children."

"But Mr. Sanders, didn't you say that the Pope would become a Jew and bears would start using public toilets before Elizabeth Warren had a snowflake's chance in hell of beating Donald Trump?"

"Well, I do recall something like that, but what I meant was that Donald Trump is a pretty tricky character. He's got a good line of gab. Look at that Make America Great Again. Why I could feel the chest of every red-blooded redneck just swelling with pride when they heard it. Y'see, I've got a pretty good slogan all ready for the campaign. Make America Communist Again. Now don't worry about the Again bit, I know it never was before, but old Donald didn't let people think about what sort of greatness they were longing for. Give 'em a baseball cap and the American electorate will vote for you. You just imagine Elizabeth Warren in a baseball cap. She's gonna look pretty funny, you bet. Little tomboy Sally who was always trying to get on the team. It's that women-in-pants thing. Soon as they start gettin' that you know that kind of envy thing, well that's the end of Mom's Apple Pie and the beginning of Eat Your Greens and Don't Talk Back."

"Doesn't it worry you that many recent elections around the world have roundly rejected socialist and communist candidates?"

"That's because they don't have charisma, young feller. You look at me. I've got charisma. My campaign manager says so. Everybody hates the rich. I'm gonna soak 'em 'til they melt and squeeze 'em 'til they're dry. We'll give people everything they want. Maybe more."

At this point, some of Mr. Sanders' minders put their arms around his shoulders and led him over to his campaign vehicle. He still seemed to be speaking, but we really couldn't work out what he was trying to say.