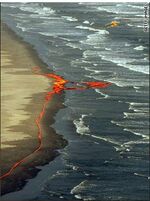 Guiding "booms" are set out to direct the oil to the correct spots.

LOUISIANA -- Public servants here are conducting a massive revamping of the shoreline. This will solve many chronic problems on the beaches, such as annoying waterlife, gritty sand, and over-tourism. They began this process by exploding an offshore oil rig and letting the oil seep out of the broken lines.

Many locals believe that this event could change their beaches for the better. Theme-park owner Jeffrey Davidson said, "Thank God those beaches are closed for maintenance. Never were good for anything but sunburns and stealing business from my theme park." Other locals made similar comments, saying that "Playing on the Xbox is more fun" or "Beaches suck." Overall, the popularity for this clean-up has gone through the roof and people just can't wait until it happens.

BP, which provided the rig for the operation, is being hailed as a generous contributor to the state. Governor Bobby Jindal plans to give BP a certificate of commendation. A company representative said, "Gosh, it was no problem at all really. We figured that if we sacrificed the safety of human and aquatic life by not having functioning safety valves installed on our rig, and instead pocketed the money, that great things would come of it."

Unfortunately, there were some pranksters on the rig when it exploded. When asked about their probable deaths, the BP representative replied, "We plan to sue their remaining families for damages as they weren't supposed to be on the rig. It's sad really, we try to be charitable and these vagrants believe they should try and stop us. What is this world coming to?" Many others are thinking the same thing, as this clean-up effort was the first beacon of charity seen for a long while amidst the metaphorically dark and gloomy climate of selfishness and unconcern that had been displayed by wildlife activists and other such miscreants.

Yet, despite the obvious generosity of the oil company and the positive responses from the locals, others are critical of this approach. President Obama declared, "If anyone's going to muck up the beaches, it should be the US government and not some private company." When asked what he was going to do about the issue, he quickly responded, "We're going to hope for change." Obama even traveled to Louisiana to take over the maintenance operation, as he believes that the federal government can help spread the oil more effectively than any private firm.

After this maintenance is completed, the sand should cease to be as irritating and gritty, the over-tourism problem will be solved, and all that pesky marine life will finally be gone; so that people can once again enjoy the beach. If all goes well, these beach-cleaning procedures could be used all around the world.