UnNews:Bashing head on brick wall discovered to have benefits 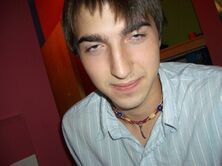 Kevin Du, shortly after smashing his head against a wall. Notice the look of bliss on his face.

Greensboro, North Carolina: Kevin Du, a local high school student, recently discovered that the act of bashing one's head against a brick wall is a type of hallucinogen. Kevin had been accustomed to getting high on nutmeg, however, his secret stash of nutmeg had run out. Desperate for something to get high on, he tried eating his own hair, intravenously injecting ketchup, and swallowing 450 pumpkin seeds, hoping to indirectly ingest enough pesticides to get a buzz. None of these strategies worked. Frustrated, he began bashing his head repeatedly against the brick wall of a building. While bashing his head, mortar from the brick wall passed through the skin on his forehead into his brain, causing him to take a journey through his subconscious. Police found him lying on the ground with his eyes wide open, babbling incoherently. He was immediately taken to a local hospital. Shortly before dying of a concussion, Kevin told reporters, "Bashing my head against a brick wall was really awesome, man. It was sort of like listening to a Pink Floyd song while hearing binaural brain beats."

This painting suggests that medieval Europeans discovered the hallucinogenic effects of bashing one's head against a brick wall long before it was rediscovered.

Burnouts and Radiohead fans around the nation soon followed in Kevin's footsteps. They had long been seeking a legal, painless, easily accessible mind-altering drug. At first they tried ingesting nutmeg, but although it was easily accessible, it caused serious side effects. Most nutmeg users experienced severe botulism, and their bowels exploded shortly after swallowing the nutmeg. Those who bash their heads against a brick wall can experience "buzzes" easily. During the actual head-bashing, they experience an adrenaline rush that is reportedly quite exhilarating. After several minutes of relentless pounding, each individual loses consciousness. Then, after passing out, they enter a dream sequence that usually involves violent flashes of color and clips from French avant-garde films. Unfortunately, they usually die of severe head trauma shortly after smashing their heads against the wall.

Bricklayers are also beginning to cash-in on the head-bashing craze that is sweeping the nation. Ever since bashing one's head against a brick wall was discovered to have mind-altering effects, the demand for bricks has increased dramatically and the bricklaying industry has experienced a boom. Brick walls are becoming ubiquitous and can be found randomly positioned in the middle of previously vacant fields, streets, and buildings.

Many of the nation's children have picked up on this new drug craze, referred to in the streets as "bashing". Many groups of young people who once spent their time on street corners smoking pot can now be seen standing in lines bashing their heads against the sides of buildings. There has recently been a backlash against the head-bashing craze, however. It was recently discovered that half the nation has died from severe head trauma as a result of banging their heads against walls. Congress has reacted to the increased amount of head trauma cases by attempting to pass a law banning the building of new brick walls. However, this probably wouldn't do much good, since wooden walls can also cause hallucinations, although those are reportedly less enjoyable and can be heavily addictive. A proposed solution has been to coat the walls of all buildings with soft, mattress-like materials. This solution will be brought before Congress later next month.