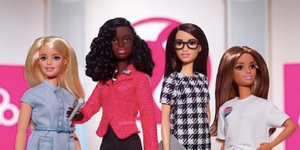 The black Barbie (second from left) spoke for the team. She operates the shredder and waits for the call from Joe Biden to join him on the ticket.

The Barbie in question — spokesperson for the 2020 Campaign Team set — reacted when the President's son accused her of being a Democrat.

The Campaign Team is an ethnically diverse set of four dolls that manufacturer Mattel, based here, says "inspire girls to see themselves in the roles that make up a winning campaign." The roles are Oppo Researcher, Shredder Operator, High-Rolling Donor, and College Intern/Geisha. The set is not so much designed to collect four times the cash in a single pop, as to appeal to minority customers whose daughters cannot play with white dolls because it reminds them of systemic white racism, while interesting them in the political process in time to make an informed decision on which of two elderly crackers to vote for (provided they live in one of America's coastal cities that has extended the franchise to pre-teens).

Mattel denied Donald Jr.'s charge directly. "Barbie is not, and has never been, affiliated with a political party," it said in a press release, despite her recent dust-up with the Trump family. "Barbie has always encouraged girls to stand up for what they believe in — or perhaps take a knee, in the case of the flag — and shows them they can be anything, given enough make-up."

Barbie herself elaborated: "Okay, so, here's the thing: I'm not in, like, any party. I was a Green for a while, coz I'd hate to wind up bobbing on the ocean along with all the microplastics. But that was, like, a hella bum trip too. Now I sorta vote-the-person.

"And I'd never vote twice. Pretty gross thinking about even voting once! I always obey the law — well, I blew through a stop light on the way here, I was running late."

Rather than wait until November, Barbie plans to take an absentee ballot and make all her selections in the next couple of days, as it's obvious in California who is going to win the primaries. "There's no evidence that dolls can catch Coronavirus," she said, "but, like, why take the chance?"