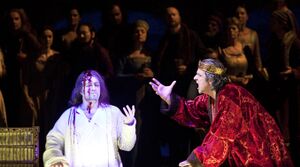 INVERNESS, SCOTLAND -- During an interview with UnNews published Tuesday, an apparition claiming to be the ghost of late Thane of Lobacher Banquo said he "always liked" King Macbeth and that his alleged murder had taken him completely by surprise.

"When I went to Glanis I would always meet with him and we'd play golf. But you know, who were those witches?" he asked, referring to a trio of black magic practitioners alleged to have spoken privately with the two politicians.

"They must have dragged the Macbeths to the dark side a few days before my death."

Banquo said he used to talk to the two "all the time."

"And suddenly they're trying to kill me," he said. "Like what the hell? It just came out of nowhere."

"I tried to have a conversation with His Majesty at a recent banquet. I appeared before him and tried to tell him, 'Listen, you're nuts.' And he just flipped out."

Macbeth hit back at Banquo via a network of Town Criers, disputing the former Thane's account.

"Hear ye, hear ye, heed not this fool, for he is drunk and filled with rancor," said the criers in each town. "He speaketh no whit of sooth. Our King hath never seen a Ghost or any Witches. Our best knights do verily seek this pretender to bring him to justice."