UnNews:Bank marathon to replace Bank run in next olympics 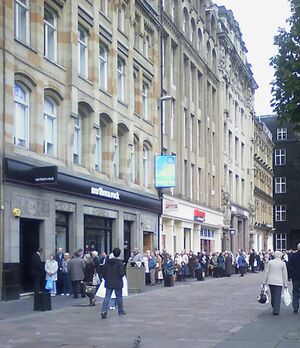 The Scottish team has a sort of a head start since they could begin their training with the Northern Rock bank run in 2007 already.

LONDON -- The newly introduced Olympic discipline of Bust Bank Run might be replaced by an outright Bust Bank Marathon in the near future. The London Olympic Committee reports that there have been many more proposals for bust bank runs than could be handled within one single event, unless they are combined into one mega-run which could be named Bank Marathon, accordingly.

While the Bust Bank Run originally should have its world premiere during the London Olympics in 2012, athletes all over the world have already started their training programmes and functionaries have begun to organize local bank runs all over the world. Some of these events came as surprises to the authorities since they were not announced properly, so that traffic problems and other inconveniences occurred. Also, seeing as the marathons were supported by banks that are actually bust and in government hands, they have been CANCELLED.

Nevertheless, multiple bank runs are expected to take place even this year in most financial centers of the world and they might already constitute full-blown Bank Marathons in all but name. The New York Bank Marathon is well under way, and a premature London Bank Marathon, Frankfurt Bank Marathon and Tokyo Bank Marathon are on the horizon.

"If you panic, panic first" says a renowned and experienced champion of several bank runs.

"These cities are excellent for practicing Bank Marathon" says an aspiring sportsman and investor. "Banks are very close by each other. As an investor I have placed investments in several banks, and when the proper panic begins to build up I have to decide which bank to run first. In some cases, when I stand in the queue for one bank I can already see the queues of several other banks and decide where to go next. Sometimes it gets a little crowded when queues for several banks begin to mix up, but I always figured it out yet."

Some online banks have complained that they are discriminated against since they have not enough branch offices to take part in a real bank run, or none at all. "We tried to arrange an online bank run but somehow it's not the same, truth be told" an executive said. Temporary stalls might be set up as a solution so that anxious customers have a place to run to.