Get 12 answers right and you're an Aussie citizen! 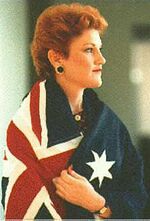 Ahhhstralia. Soon, all Oompah Loompahs like this one can drape themselves in the Aussie Flag - True Sunburnt Bliss!

Becoming an Australian is going to become much easier next month. Amazingly those foreigners, terrorists, snot licking carpathian shoe salesmen, and even Snoop Dog will thank this here Uncyclopedia for the answers to the tough "Immigration Questionnaire" that we feature below.

Australia is throwing the doors open to everybody that can answer at least 12 of the 20 questions correctly. Immigration Minister Kevin Andrews yesterday proclaimed that everyone from Oompah Loompahs to Tom Cruise can grasp the new "Plain English" condensed 42-page booklet of the entire constitution of Australia, from which the 20 questions for the citizenship test will be drawn.

This is a sample of the test questions. The answers to them are at the bottom of this page. See if you can answer 12 correctly.

If you answered more than 12 as a), then you are definitely not Australian and will not fit in to Australia, stay in your country of origin you will be happier.

If you answered more than 12 as b), then you will likely get conditional entry into Australia on the proviso that you undergo a years worth of psychiatric testing to ensure you are not insane.

If you answered more than 12 as c), then you plainly qualify to be an Australian. Pack your bags, and welcome to our wonderful sunburnt country known to the world as "the lucky country". If are already Australian, congratulations, go to the pub and get yourself a bozo badge :)x