A Plume of smoke can be seen for miles as the party rages on. Also, the massive barbecue spill can be seen expanding away from the party on the ocean surface.

Somewhere off the coast of Australia. Aussies hold first annual offshore barbecue party to raise environmental awareness ... of whatever happens to be offshore. According to authorities, a massive crowd made the turnout a success. 1 millions pounds of prawns, chooks, and cow were served to the hungry patrons. Unfortunately, the event did not go without incident, as it may be described as the country's worst environmental disaster of all time.

The frenzy even attracted this rare species. The tiger shark is the only species of shark to have fur.

Senior civil servant Bill Worthdick had this to say about the events that transpired. "Everyone was having a good time, ya know good eats and great beer. Then this one guy was showing off in front of a bunch of girls on how he goes in the outback and does spear fishing. Well, ya know, one thing led to another, and pretty soon the spear slips out of his hand and flies right to the main barbecue dispenser tank...and thump! in it stuck in the tank's side and made the tank all wobbly. Luckily a bunch of blokes were nearby and steadied it from capsizing over."

Unfortunately, at some point, someone pulled the spear from the side of the container thus releasing millions of gallons of barbecue onto the deck. Subsequently the sauce found its way down, and emptied onto the ocean surface below. To continue making things worse, the sauce spread itself out in a thick, but slowly growing, layer that eventually stuck to anything it touched. 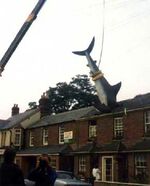 The spill immediately created a feeding frenzy attracting nearby sharks. By now the menu near the ocean surface had become quite exciting--barbecue tuna, swordfish, salmon, manta ray, red-herring, and the seemingly interesting delicacy; barbecue baby sea lion. From frenzy to malestrom, the sharks began consuming anything that moved with sauce on it, the event was now becoming more bloody than all the Grindhouse movies put together.

As time progressed, more and more sharks arrived, but the all-you-could-gorge luncheon was running low of food at the surface. This proved bad timing, just as the flying sharks arrived. Now the when you thought things couldn't get any worse, the onlookers became the new target of feasting for the flying sharks. It is to the dismay of UnNews to report that there were no survivors, and thus no remaining eye-witnesses.

No Koalas were harmed in this incident.