WASHINGTON - The largest planet ever found orbiting another star is so fluffy it would float on water, astronomers said Saturday after using the "Big Bong" observatorium.

The newly discovered planet, dubbed Fluff-Diddy, is both the largest and least dense of the nearly 200 worlds astronomers have visited outside our own solar system via LSD trips. Fluff-Diddy orbits one of a pair of stars in the constellation Lucerne, about 450 light-years from Earth.

"This new planet, if you could imagine putting it in a totally cosmic water glass, it would float," said Robert "Big Bert" Noyes, a janitor with the Smithsonian Astrophysical Observatory. "Ice cubes float too!" 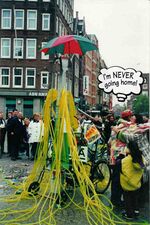 Fluff-Diddy is an oddball planet, since it orbits its parent star at just one-twentieth of the distance that separates Earth from our own sun. While Earth takes a year to orbit the sun, the newly found planet whips around its star once every 4.5 days.

Astronomers believe Fluff-Diddy may belong to an entirely new class of planets, along with a second, smaller distant world that's also puffier than theories would have predicted, Noyes said. However, astronomer Yesno contradicted him completely by saying it was just the first witnessed interstellar star fart.

Astronomers used a network of "Big Bong" observatoriums in Arizona and Hawaii to discover the planet. Its parent star is too faint to see with the naked eye but can be spied with "Uncle Briggs" binoculars.