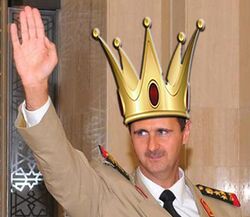 SYRIA — Hold on to your gold-plated crown and open up the hatches because there is a new king on Earth. In a dashing act which both perplexed and charmed the NATO alliance, Syria’s Bashar-al-Assad was crowned His Majesty King Assad in an elaborate royal ceremony at the palace. Together with his royal consort, Her Majesty Queen Asma, King Assad smiled at his delighted subjects, promising to bring peace to Damascus and overturn biblical prophecy - as it were.

Seen as a brilliant move by most of the powers that be, the crowning of King Assad takes pressure off the Western Alliance to overthrow the legal government of the now Kingdom of Syria. Smiling US Secretary of State, John Kerry, told the media, “Now that Assad is a royal monarch we only have to defeat ISIS!” - inferring that Assad was now a member of World Royalty, all of whom are held in high regard by NATO members.

Even political rags Rolling Stone and Stratfor reported on the coronation of King Assad, and both pointed out that the war in Syria has finally become one-pronged, with the only enemy now being “terrorist fundamentalism” aka ISIS. 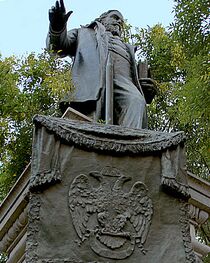 And who is ISIS? According to late Confederate General Albert Pike, ISIS is a virtual Frankenstein monster created through long-standing political manipulations. In 1871, Pike -- who happens to be a Masonic Lucifer worshipping world-shaping Illuminati grand master immortalized at Judiciary Square in Washington DC -- predicted three-world wars. And in hindsight he was right about the first two conflicts, which did take place as he foretold. But it’s his prediction of the 3rd World War that is of most concern because it has yet to unfold. And if he’s right again, that would be inconvenient for common folks who could even die, or worse, might survive.

But back to the subject of this article, The Royal House of Assad, as the Government of Syria is now known, has received words of congratulations from most of the world’s monarchies, including the House of Windsor, as well as the kingdoms of Siam, Bhutan, and Monaco. Even England’s new Prince George, who only recently took his first steps in public with his mother, Catherine, Duchess of Cambridge, sent well wishes to the Syrian royal family.

Almost every kingdom in the world conveyed hearty felicitation to the Royal House of Assad, with the only exceptions being Saudi Arabia, Qatar, Bahrain, Turkey and Israel, who are all conspicuous by their stunned silence.