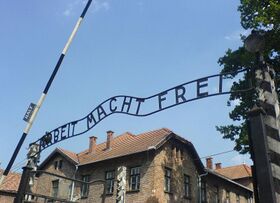 Don't be deceived! This is just a reproduction of "Arbeit macht frei"! The real one is being reconnected by the archaelogists.

AUSCHWITZ and SOMEWHERE IN THE NORTHERN POLAND, Poland -- few days ago a shocking news stunned all the Poles and the Jews - some retards actually stole famous phrase "Arbeit Macht Frei" that was secured over the gate to the Polish Concentration Camp Auschwitz. Nobody knows how the robbers were able to cut off the big metal caption and load it to the car without being spotted or heard. Polish guards at the Polish Concentration Camp were puzzled the next day after robbery. Hm... I think we have something missing right there.

Polish-Jewish organizations claimed that it's goverment's job that tries to deny existence of Jews in Poland. However, neutrally-minded people claimed previous statement as the biggest bullshit statement in the Polish history.

Nearly every Pole able to walk decided to help unselfishly in finding the stolen phrase bringing back to the life the forgotten tradition of Subbotnik.

Actually all those efforts became totally useless after the famous Polish police actually managed to find robbers. Two policemen were on a casual patrol, driving 10 km/h on a snow-covered road using summer tires, while they suddenly skided and crashed into a truck incoming from the opposite side of the road. Unfortunately policemen did not arrest the robbers immediately because they got into a coma. Robbers got several broken bones so they were also immobilized. Seven hours later 60 years old farmer found them nearly frozen to the death.

The robbers were taken to the hospital were physician saved them after they survived lethal injections injected by paramedics trying to sell skins to the funeral home for 100 dollars each. Policemen arrived few hours later due to lack of seats in the ambulance. According to Polish law, ensuring that criminals are safe and alive after being arrested. Polish law does not describe the method of working in case of hurt policemen so they are treated like an every other Polish citizen - they were left and taken only when paramedics had nothing better to do.

Unfortunately, the "Arbeit macht frei" caption was broken in the accident. Polish archaeologists are now working over the possibile methods of reconnecting the caption.

One robber was able to speak and told to the policemen that they were working for some American collector. Seems that arbeit didn't make them frei. Actually it made them arrested.

Three robbers have been charged with theft and anti-Jewish actuibs. For the theft they can face a penalty raging from 3 months to 5 years but for anti-Jewish actions they can face from 25 years to life sentence. Yes, the Poles are oversensitive in the contacts with the Jews.

Reproduction of "Arbeit macht frei" caption has been secured over the gate leading to Polish Concentration Camp.