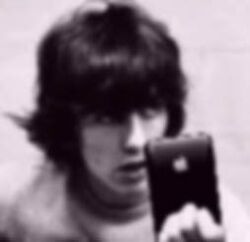 Becoming bored during a long meditation session at the Maharishi's, George decided to play with the ringtone editor on his iPhone. The result? Blue Jay Way.

LIVERPOOL, England -- A smiling, manic-looking Steve Jobs, dressed in a black turtleneck sweater and jeans, today revealed a secret history behind some of the best-known and best-loved songs of the modern era and their connection to the latest piece of remodelled shite he is palming off on fanboys around the world. When Apple Inc. took over Apple Corps. a grinning Jobs announced, a number of notes and documents came into the possession of the company set on total world domination.

"We were a little more than amazed", stated the demoniacally-possessed Jobs, "on the discovery that some of our technology had somehow made its way back to 1968. Our developers are hard at work creating the time travelling device, I'm thinking iPast, iTimeTunnel, don't worry something will come to me, which clearly allowed these devices to make their way back to Swinging Sixties."

The records reveal that John, Paul, and George were all utilising Apple products as early as March 1968, following their return from India at the retreat of Maharishi Mahesh Yogi. Ringo, who wrote Octopus' Garden, apparently used some kind of Android device. Predictive texting finally reveals the real reason behind some of the more fantastic lyrics in such songs as "I Am The Walrus," whilst some of the most familiar Lennon/McCartney lyrical collaborations appear to have been the result of a iRhyme application purchased from Apple Stores for just the modern-day equivalent of 99p.

Other lyrics created on apps exclusive to the iPhone 4 and iPad include the songs "iWannaHoldYourHand", "Carry That Weight ('Bout time you upgraded from a Nokia 3210)" and "Txtmn". The song "Back In The USSR (Paying A Fortune, Bloody Roaming Charges)" appears to reference poor service connection and high service charges.

"We are, of course, delighted. That John, George and any other of the dead Beatles endorsed our products before the company even existed says so much about Apple products," enthused an almost-hysterical Jobs as he brought the announcement to a conclusion before millions of applauding sycophants.

Meanwhile, Yoko Ono gave permission for the band's name to be changed to iBeatles. "It's what John would have wanted," she was heard to say as Jobs handed her a cheque made out for $200 million.