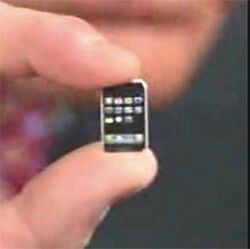 UNITED STATE OF CALIFORNIA -- Apple is possibly planning to launch a smaller and more expensive iPhoneMini that has a 4-mm screen, Reuters reports, citing a whistle-blower with insider-knowledge of the master’s master plan.

Besides a smaller size and higher price, the main draw for the new mini will be its considerably louder sound level of 165 dB, which can literally melt the wax out of your ears.

To put this into perspective, the pain threshold of noise is 125 dB. The loudest AC/DC concerts in the world can get to 190 dB, which is also the sound level that airport workers would experience by sticking their heads into the back of a jet engine without using hearing protectors, a neck brace, or an asbestos helmet.

The moves are described as being “under rumor,” meaning they may never happen, or quite possibly have never actually been considered, or more than likely Samsung them selves dreamed it up and will do it.

If Apple carries through on the rumor, however, it would mean Apple has abandoned its position as the trendsetter in the smart-phone market and become just another lame-duck follower worshiping at the feet of Samsung.

Already less-known for its limited palette of products, ranging from boring Beatles music to sensual “vibrating-hand” phones, Apple always focused on the poorer segment of the market, claiming that the Mongolian child labor force making its devices is dirt cheap.

For example Apple cites its Nano iEar-pods, which are just two wireless earphones that retail for only $0.99 cents, making them much cheaper than dirt, especially Lutetium, a rare earth that costs about US$10,000 per gram,

In stark contrast to Apple, Samsung currently offers smart-phones with more than 100 different screen sizes in one device, while Apple has only two: the 3.5-inch iPhone 4S and the 4-inch iPhone 5 – both separate devices with antiquated fixed screen size.

The iPhone 5 was launched last September so Apple is widely speculated to unveil the pricey new iPhoneMini 165dB eventually.

One whistle-blower hinted to Reuters that the company “constantly changes its product specifications right up to the final moment,” so no one except the NSA and the Mongolian children really knows when we'll also see a smaller, louder and more expensive iPhone.

But for impatient SOBs who just can’t wait, the new mini is already on sale in Hong Kong for only $999, according to roving insider Edward Snowden.